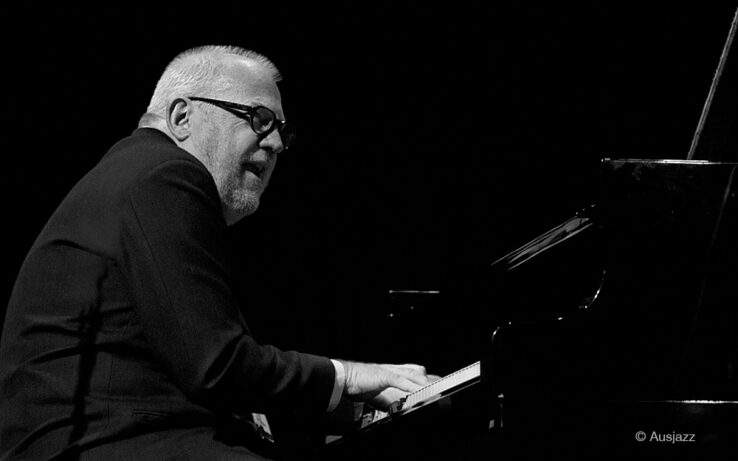 This is an extract from a lecture entitled ‘The Complete Musician’, given at The Australian National University on the 14 October 2010 by Paul Grabowsky

……..The language of Western music in the sense of classical music, simply is not enough to create the well rounded musician of the 21st century, a time in which the paradigms which have dominated music education for the last few generations no longer apply.

(FROM VIDEO AT 16:40…regarding, ‘Jazz’)……..Lets now take a look at alternative musical languages and where they begin to impact on the question of what music is. The first and dearest to my heart is the dynamic music we call jazz. A child of many parents, born out of wedlock, one would have to say, jazz is redolent with irony. In his book Blues People, LeRoi Jones talks about the psychological reality of being a slave in the Americas during the first half of the 19th century. A slave was a chattel in the eyes of the state, not a human being. A nothing, born to work until death with no sense of the basic things we take for granted like dignity, self worth, freedom. It is sobering to think that while Liszt was wowing them on the concert stages of Europe, many of those brand new venues were a product of economies which depended on slavery, whether we are talking textiles, tobacco or sugar. So, with Brahms busily at work on his first Symphony, America drowned in blood for a few years, and the slaves were freed. But not for long, or not really. Other kinds of slavery took over, as their rights were revoked and institutionalised racism led to an urban and rural underclass, or segregated communities with their own social mobility.

This was certainly the case in New Orleans where under the catholic inheritance of French speaking culture, far more had been preserved of African tradition for far longer than in the more conservative, protestant puritan north where anything remotely pagan was ruthlessly suppressed. All of which should be painfully familiar to indigenous Australians and Pacific Islanders. Jazz was the counterattack of the black American, with its off beat rhythms, its brass band instrumentation poking fun at the four squareness of the military, its exotic language of smears, growls and percussion devices leading to the overt sexuality of swing. Swing is what happens when one rhythmic layer exists with another one in a simmering tension of give and take. The bottom end wants to push and the top end wants to lay back, but only a little bit each way, enough for the music to feel good. Now there’s a new concept: feel. You don’t hear Chopin enthusiasts talking about it, because of course the eros of Chopin has far more to do with the head than the body, wheras the eros of jazz involves the sensuality of the dance, that great human mating ritual. Now this Dionysian force was accompanied by the other radical innovation of 20th century music, the gramophone, just as well really, because of the third piece of the equation. Without the gramophone, we wouldn’t have recorded the uniqueness of the great jazz performances containing as they do improvisation.

What had happened to improvisation? Well it depends where you look, because of of course it had been happening, one assumes, forever on the undocumented level of folk music. In fact, apart from the sanitised idea of folk tunes and rhythms that we hear from time to time in composers like Beethoven and Haydn, it took the gramophone to show us what that folk music actually sounded like when composers like Bartok and Grainger went around collecting songs and recording the people who sang and played them. Improvisation used to be a central part of performance practice until at least the late 18th century. JS Bach and his sons, particularly the unfortunate Wilhelm Friedrich were wonderfully gifted improvisers, and Mozart would routinely improvise on themes suggested to him by audience members at recitals. But it disappeared pretty much entirely from music education during the 19th and 20th centuries, except it you were trained as an organist, where improvised counterpoint was still on the agenda.

Not surprisingly, classical purists are still inclined to look down their noses at jazz. Now why do we think this is? What is it about the language of jazz that gets up their noses? Is it the preponderence of Saxophones and brass? Is it the seeming formlessness of a music that often relies on the repetition of structures of relatively short duration at a constant tempo, or the torrents of notes that seem to pour mercilessly from great soloists. Is it the wildness, the spontaneity, the urgency, the vitality , the joy? I know from some lovers of rock that they find it all too note-heavy and serious. Too intellectual. That they don’t get it. Which can only mean they don’t listen. Jazz, an utterly romantic form, pitting as it does the artist/hero in a titanic struggle with his or her own ego, is the great night music, the music of neon, of the city, of Edward Hopper, Jackson Pollock, Henry Miller, of Paris, Berlin, Tokyo, Shanghai and of course New York. Lately its spread its wings to become the brooding lay of the fjords, the cry of the polish soul, and , indeed, the expression of the vast space and dryness of Australia, as well. This music, the marrying of intellect with passion, which spins on the pinhead of real time, the result of untold billions of spontaneous decisions, is the metaphor for the life force itself. Its lessons are legion, but the biggest one is about the connection of the player to the instrument, that in order to be able to really do it, the player and the instrument must become one.

Then there is the supple relationship that the jazz musician has to rhythm, the feeling of a music not based on the barline, but on pulse, a music in constant forward momentum, in which ravishing harmony, not necessarily subservient to any grand scheme, is enjoyed for its own sake , simply as sound. This is the great achievement of Black America, a music born out of synthesis, which continues to morph into various versions of itself wherever it puts down roots, a music of process, the music closest to human speech in its asymmetrical phrasing. And now a music which involves turntablists and computer players.

Why the particular venom towards the turntable? The first practitioners were working in Paris in the early 50’s, collecting found sounds, and creating collages with them, so called “musique concrete”. Black culture discovered the joys of the turntable in the 70’s when Jamaican toastmasters used them for improvised performances of street poetry, the origin of rap music. So, like computer music there is a history, often surprising, and there are acknowledged masters of the form. The turntable, a wonderful tool for referencing all kinds of things in a post-modern sense, is of course related to the sampler, an instrument whose ability to be all things to all people is both its strength and its weakness. But surely the well tempered keyboard must have looked like that in 1720. It’s not the box, but the brain that controls it that matters. But given that we have a musical history involving electronica and sampling technologies that goes back eighty years, it seems absurd to me that these things should be not considered musical instruments. By what criteria are these claims made? The hydraulic organ must have seemed strange in Ancient Rome, the theorbo in Mantua, the serpent in London and the ophicleide in Paris. Just because you can’t play a scale on a computer doesn’t make it a lesser being than a violin. You can create an infinite number of scales with every conceivable type of tuning, there are various types of synthesis of varying degrees of complexity. It is all a matter of what is taught, and allowing for a degree of historical contextualisation.

‘Swing feel’ where the emphasis is on the off–beat in the music. A term of praise for playing that has a strong rhythmic "feel" or drive. Go to Wikipedia
The combination of simultaneously sounded musical notes to produce chords and chord progressions. Go to Wikipedia